Five years ago, theatergoers and critics were dazzled by the vivacious, culturally significant musical “Hamilton” about the nation’s first Treasury secretary, political mastermind Alexander Hamilton. Now you can see the thrilling, live-capture, the 161-minute film version with the original principal Broadway cast.

Utilizing a racially/ethnically diverse cast singing exhilarating R&B, jazz, pop and hip-hop music, writer/composer/performer Lin-Manuel Miranda tells the story of a poor immigrant kid who was born in 1775 on the tiny Caribbean island of Nevis.

Based on Ron Chernow’s exhaustive, insightful biography (2004), it not only reveals Hamilton’s relentless ambition but also his romantic entanglements. Even after marrying Eliza Schuyler (Phillipa Soo), he maintains a relationship with her sister Angelica (Renee Elise Goldsberry), his intellectual soul mate, while indulging in an adulterous affair with Maria Reynolds, the nation’s first sex scandal.

Most of the humor emanates from England’s arrogant King George III (Jonathan Graff), who is clueless about why the rebellious colonists demanded their independence.

“So much of what ‘Hamilton’ is about is how history remembers and how that changes over time,” observes Miranda, noting it’s particularly relevant during our country’s coronavirus pandemic, along with Black Lives Matter, amid the bitterly divided political landscape.

On the Granger Movie Gauge of 1 to 10, “Hamilton” is an innovative 10, a cultural phenomenon now available anytime, ad-free on Disney Plus for $6.99 a month — cancelable at any time.

Based on the true story of Afghanistan’s bloodiest engagement, the 2009 Battle Kamdesh revolves around 53 brave U.S. soldiers in a remote Outpost, tucked deep in a valley at the base of three mountains near the Pakistani border.

In charge is First Lt. Benjamin Keating (Orlando Bloom), whose mission of ‘counterinsurgency’ involves bartering with local village elders for their cooperation since the vulnerable Outpost is surrounded by hundreds of Taliban militants.

The Army is actually planning to abandon the Outpost but no one has informed the troops. Instead, they’re ordered to move a huge truck up a narrow road with tight, treacherous switchbacks so it can be used elsewhere.

Based on CNN journalist Jake Tapper’s “The Outpost: An Untold Story of American Valor” (2012), the visceral action thriller was adapted by Paul Tamasy and Eric Johnson and adroitly helmed by former film critic-turned-director Rod Lurie (“The Contender,” “Nothing But the Truth”), a 1984 West Point alum.

Scott Eastwood delivers a memorable performance. When he voices the line — “No, not today” — his vocal tone/delivery is exactly like Clint’s — and it’s eerie that his real-life character is named Clint.

NOTE: since theaters are closed, try to view this in a darkened room on as big a TV screen as possible. Do not try to watch on an iPhone or laptop because it’s not as effective.

On the Granger Gauge, “The Outpost” is an intense, indelible, immersive 8, commemorating courage at its highest level- streaming VOD.

This edgier, re-imagined HBO version is set during the Great Depression in the early 1930s, and Perry Mason has become a seedy, boozy, cynical private detective, played by wiry Matthew Rhys (“The Americans”).

“He lives and dies by: ‘There’s what’s legal and there’s what’s right,’” says Rhys. “The one thing that elevates him is his sense of justice. He was once dealt a huge blow by a betrayal of justice. It kind of becomes his North Star. So regardless of his means, ultimately, if what he does is right, it’s warranted.”

Suspicions surround both parents (Nate Corddry, Gayle Rankin) and their ties to the Radiant Assembly of God, run by inscrutable Sister Alice (Tatiana Maslany) and her mother, Birdy (Lili Taylor).

What most impressive are John Goldsmith’s period-perfect settings and Emma Potter’s impeccable costumes. Disheveled Perry Mason has a perpetual five-o’clock-shadow and sports a signature fedora.

On the Granger Gauge, “Perry Mason” is a grim, gruesome, gritty 4. On HBO, take it or leave it.

Born July 29, 1945 and raised in Lima, Peru, Danielle was part of the first class of female police officers in Lima.

Though enrolled to study medicine, Danielle immigrated to the United States in 1965, where she married Manuel T. Murrugarra, having met in their adolescent years back in Peru.

Of strong character and work ethic, Danielle was a self-employed housekeeper and became a mother to two sons, Richard and Peter.

A strong character continued to define Danielle’s later years, as she battled against Huntington’s Disease (HD) and complications as a result of HD.

Though reaching a point of not being able to care for herself anymore, she continued to try to the best of her abilities, often hiding her struggles, so that her children could flourish.

Danielle is survived by her former spouse Manuel and sons Richard and Peter of Westport, her siblings Manuel, Melchor and Angelica of Lima, Peru, Gricelda of New Jersey, and a thriving group of loving nieces and nephews. Danielle is predeceased by her brother Moises Navarro of Lima, Peru.

Donations in Danielle’s memory, may be made to the Huntington’s Disease Society of America (HDSA). Flowers are also appreciated: 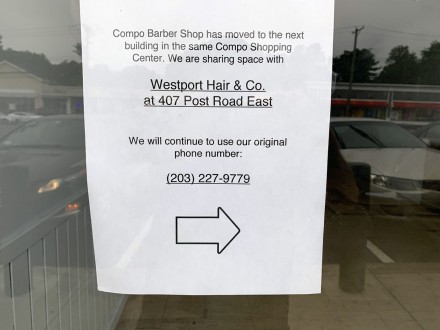 Compo Barber Shop, a mainstay in the Compo Shopping Center for decades, has moved down the block where it will share space with Westport Hair & Co. A sign aleted customers all the familiar barbers have made the move, too. The shop was owned by almost 60-year proprietor Tommy Ghianuly, who died in January 2019 and his customers were a Who’s Who of Westporters. The new owner is Uzbekistan-born Rami Pirov, (CLICK TO ENLARGE) WestportNow.com photo

It is the first time in almost four months the state has not added to the virus’ death toll during its daily reporting.

Gov. Ned Lamont attributed the achievement to residents’ discipline with public health measures such as social distancing and mask-wearing.

The number of hospitalized COVID-19 patients has also been mostly dropping since late April, although there have been a number of individual days that saw increases.

Lamont said the day’s increase in hospitalizations — which brought the state’s total to 83 — did not concern him.

He said that hospital admissions have remained steady, but discharges dipped in the last 24 hours, leading to the increase in total hospitalizations.

“I would’ve been really worried if the admissions were beginning to spike. That’s not what happened,” Lamont said.

“The admissions are flat. But not as many people got discharged. That’s going to happen a lot. I’m not that concerned about that number.”

The state said today its Westport COVID-19 case count was up one to 313 (298 confirmed and 15 probable) while the number of deaths was unchanged at 23. 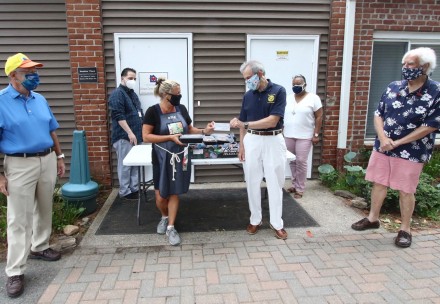 The Gillespie Center, Jesup Road, was the scene today for the Sunrise Rotary Club presentation of financial support for Homes with Hope (HwH) COVID-19 Disaster Relief program. According to Club President George Masumian, who presented a check to food caterer Alison Milwe Grace, owner of Wilton-based AMG Catering, today is the inaugural delivery of individually packaged microwave-ready servings of frozen meals for HwH residents prepared by AMG. Masumian said, “The funds provide for delivery of 100 meals every two weeks for a total of 400 individual meal servings.” (CLICK TO ENLARGE) Dave Matlow for WestportNow.com

With the goal of reducing residential food waste by 25% over the next year, First Selectman Jim Marpe announced today the opening of a food scraps, recycling drop-off area at the Westport Transfer Station.

According to the announcement, food waste is one of the heaviest, wettest and most expensive waste streams for the town to process, “and nearly one out of every four bags of groceries end up in the trash.”

In addition to the food scraps drop-off center, residents can pay a licensed food waste hauler to have scraps picked up curbside, or they can use the food waste for home composting.

“Residents are encouraged to evaluate the food they throw away, and then make important changes in the way they shop, prepare and even store food,” the announcement says.

“Sustainable Westport reminds residents that food scraps are not trash, and can become a valuable resource when turned into compost. Recycling food scraps into compost captures nutrients and energy and returns them to the environment while reducing the amount of trash in our waste stream.”

“I am proud that Westport is one of the first towns in Fairfield County to provide a food waste recycling program for its residents,” Marpe said about the drop-off area that opened Monday. “This program will enable all to play a role in decreasing food waste, which not only helps with solid waste disposal costs and our taxes, but is good for the environment.”

Peter Boyd, chairman of Sustainable Westport, said the initiative is integral to the town’s Net Zero goal by 2020.

“These next few years are crucial as we turn our creation of energy and waste and use of water in the right direction,” Boyd said. “Getting involved in the Zero Food Waste Challenge is something we can all do at home to help.”

The governors of Connecticut, New York and New Jersey today expanded a joint travel advisory to include 19 states.

Implemented on June 24, people traveling into those states from states with a high spread of COVID-19 must quarantine for 14 days.

After careful consideration and due diligence through state and local officials, the Westport Farmers’ Market said today it will open Thursday, July 9 for day-of shopping.  Hours are 10 a.m. to 2 p.m. at the Imperial Avenue Parking Lot.

WFM said it will take the following actions to ensure safe shopping for all:  require masks to be worn at all times, single direction traffic while shopping (one way in and one way out), hand sanitizer stations, social distancing and lots of fresh air.

During WFM’s day-of shopping, the air will fill with tunes from local musicians and the Friend of the Market bag plus WFM swag can be purchased throughout the day, an announcement said.

For those that feel safer in its pre-order touch-free selected time slot pick-up model, it will still be available. Details can be found at http://www.westportfarmersmarket.com