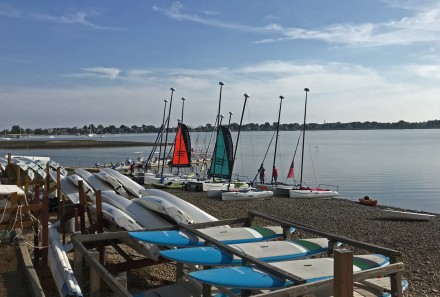 Boats and kayaks are secured late today at Westport’s Longshore Sailing School after a busy summer Sunday on the water. (CLICK TO ENLARGE) Contributed photo 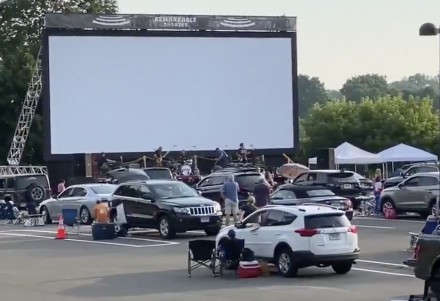 Live music returned to Westport tonight as the Westport Weston Chamber of Commerce and the Westport Library brought Supper & Soul to the Imperial Avenue Parking Lot as a drive-in tailgate concert featured the Tom Petty Project. The sold out show attracted more than 300 persons in a safe and socially distant manner. A portion of the proceeds will be donated to the Levitt Pavilion to aid their 2021 season. The next version is slated for early August with back to back shows by reggae artist Mystic Bowie and his Talking Dreds performance. (CLICK TO ENLARGE) Contributed photo

It was not the intense celebration traditionally seen at Compo Beach on the night of Westport’s July 4 fireworks. 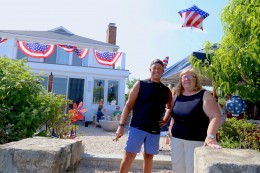 Brother and sister Steve and Lisa Girden still hosted their annual Independence Day party at the family house on Soundview Drive, though instead of having 100 guests the number was kept under 25. (CLICK TO ENLARGE) Jarret Liotta for WestportNow.com

But today found a large number of people there — mainly throughout the day — enjoying a sun-filled safe-social-distanced summer holiday.

“It’s sad, but we feel so blessed to have a day like this with our family, and to make the best of it,” said Holly Jaffe of Westport, who praised the town for implementing the guidelines it has to dissuade virus spread.

Like many others she felt some disappointment that the spark and flash of skyrockets was not on today’s menu.

Missing, too, was the beach vibrating with the many thousands of people who typically come for a full day and evening on this holiday. But that did not take away from a good time.

“It’s nice that the beaches are open,” said Bryan Good of Westport, who usually brings the family out for Independence Day.

Toward that end, as part of their celebration the family is going to be camping out in their yard overnight. 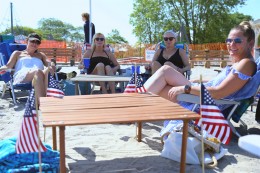 From left, Basia Dworak and Suzy Bessett of Westport, Marilyn Finkelstein of Chicago, and Monica Miele of Westport, enjoy their annual 4th of July get together. (CLICK TO ENLARGE) Jarret Liotta for WestportNow.com

Early in the day the beach was packed, relatively speaking as it currently accommodates up to 50% capacity. Visitors had to be turned away through the late morning and into the afternoon.

But as the day rolled on more spots became available and the flow of people continued in and out.

“This is the first day I’ve seen the beach this crowded all year,” said Steve Girden, whose family has lived in a house on Soundview Avenue overlooking the sands of Compo Beach since 1941.

He and his sister, Lisa Girden, were hosting their annual July 4 party — part of which includes the celebration of their late parents’ wedding anniversary.

“We generally have 80 to 100 people,” Lisa said, but this year they went much lighter on the invitations and were striving to keep the number around 25 throughout the afternoon, with seating in and out of the house to give people adequate space as they desired.

-David Levy of the Parks and Recreation Department patrols the beach making sure that people are adhering to social-distancing guidelines, as well as use of tents and other objects currently prohibited. (CLICK TO ENLARGE) Jarret Liotta for WestportNow.com

She said people, of course, were being made comfortable if they wanted to wear their masks at the party, and some chose to do so while others did not.

“This is the first time in all these years no one has put chairs out,” she said, noting the custom of reserving space on the beach itself for parties and picnics.

“It’s a shame,” said Denise Thomas of Westport. “I’m disappointed that there are no fireworks. It doesn’t feel like the Fourth of July.”

Ironically Thomas always has her flag on display any time she’s at the beach for a picnic.

“I always bring the flag,” she said, noting it was purchased at a July 4th celebration at Compo Beach years ago.

“I’ve always just kept it in that bag,” Thomas said.

Holiday trappings were minimal across the beach, however, with a few other flags on a display, a couple of flag-themed swimsuits and a red, white and blue towel here and there.

Denise Thomas of Westport always has her flag on display at the beach, after having bought it as a July 4th Compo Beach celebration years ago. (CLICK TO ENLARGE) Jarret Liotta for WestportNow.com

With the barbecues closed and no picnic tables on South Beach, comparatively few people were even set up on that side as the day grew long.

Staff from the Parks and Recreation Department patrolled the beaches, doing their best to encourage people to set up at safe social distances from one another, and also reminding them that items like tents and tent-like umbrellas with flaps were not permitted.

Overall, more people were without masks than were wearing them, though a greater number of people who were walking the boardwalk or on a path around the beach did have them on.

“I think Connecticut has done an amazing job,” Wendy Sobel of Westport said of efforts to assuage the spread of virus, praising the town’s efforts as well.

She said the only difference with today’s celebration was the lack of fireworks, but that she still got to be with good friends.

“It’s my favorite holiday of the year,” said Suzy Bessett of Westport, who has been hosting an annual get-together for 15 years.

Despite a lack of fireworks Bryan Good of Westport and his son Jackson, 7, had a great time at the beach today. (CLICK TO ENLARGE) Jarret Liotta for WestportNow.com

She praised a summertime occasion that didn’t require presents but still invited friends and family to be together, even if it meant at a social distance.

“We’re trying to enjoy the new normal,” she said, “as much as everyone hates to use that term. That’s what this is.”

Likewise, three couples from Weston found the holiday — even sans fireworks — a great excuse to get together, as their personal interactions this season have been minimal.

“We wanted a 3D visit,” said Hilary Shaefitz, with this group having spent the last 20 July 4 holidays together.

“We’re just grateful that this is open so we can be together,” Ronna Zaken said.

“If it were more crowded than it is now, we wouldn’t have stayed,” said Don Shaefitz. 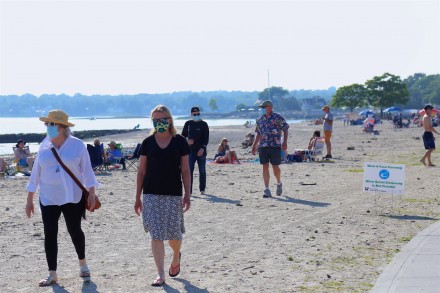 South Beach at Compo Beach normally is packed for the 4th of July fireworks. But with no fireworks this year and no picnic tables or grills, attendance tonight was sparse with many observing social distancing and wearing masks. (CLICK TO ENLARGE) Jarret Liotta for WestportNow.com 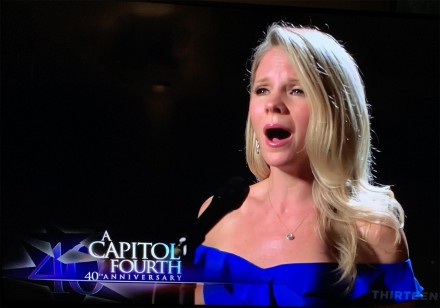 There was special television coverage tonight celebrating the 4th of July. On PBS, Kelli O’Hara, Tony Award winner and Westport mom, was among performers offering the holiday salute. (CLICK TO ENLARGE) Screen grab from PBS 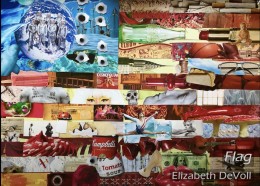 “Flag” by Elizabeth DeVoll is one of the works in the exhibition. (CLICK TO ENLARGE) Contributed photo

The exhibition which features 81 artists from The Collective is available 24/7 at three different locations — one physical and two online from today through Aug. 29.

The physical exhibition is a roughly 10 minute video featuring 81 artworks from artists all over Connecticut that is looped on a large screen TV in the window of 47 Main St.

For those still not comfortable venturing out in public, there are two locations online where viewers can see the show.  The first is on the Artists Collective of Westport’s YouTube Channel. https://www.youtube.com/watch?v=ZFOdYkCtP8

The second is an exhibition specific website that features all the images with specifics about each piece and how to contact the artist if you are interested in purchasing a particular piece. The 24/7 @  47 Main website is https://sites.google.com/view/artistscollectiveofwestport/home

The idea for the exhibition originated during The Collective’s weekly Sip ‘N’ Share Zoom. T

he weekly Zoom meeting was created by artist member, Janine Brown, as a way for Collective Members to stay in touch with each other during the pandemic.

Each week artists can join, share what they are working on, or just chat about the challenges faced by staying at home and staying healthy.

The award for the Collective Member joining from furthest away is currently held by Helen Klisser During, who joined the Zoom meeting from New Zealand.

From the seed planted during the June 10 Zoom meeting to the launch of the exhibition today was a little over three weeks.

The co-chairs for the exhibition were Janine Brown and Michael Brennecke.

Guests should continue to stop by as new work will be added and the exhibition may change throughout the run, an announcement said.

The Collective said it continues to look for other ways to bring art safely to the community.

Westport PAL and the Parks and Recreation Department today announced winners in its 4th of July House Decorating Contest. First place went to Allen Levy and Autumn Waggoner of 19 Fillow St. They received two passes to next year’s fireworks. All decorations at this house were made in America and recycled items. (CLICK TO ENLARGE) Contributed photo