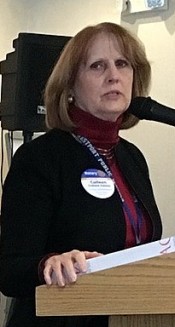 “The safety and security of our students comes before anything else,” she said at the club’s weekly breakfast meeting at the Westport Inn.

Were it not for a proactive student who heard something upsetting and reported it, “We might have been in a really different place,” Palmer said. She also praised the response of the Police Department.

Palmer said that Westport had invested tremendous resources in upgrading the outsides of the buildings, in communications, and in security personnel long before she arrived, many of the steps taken after the Sandy Hook shootings in December 2012.

Moving forward, she said she plans to do three things. One is to seek funding to harden building perimeters, “to buy time for the police to come and neutralize the intruder.”

A second is to strengthen programs addressing students’ social and emotional health, even at the elementary level. She talked about growing mental health concerns, about the stress many students feel, and about being disenfranchised.

Palmer noted the growing level of violence in society, attendant to many video games, movies and to TV programming that are also factors in creating the irrational mindset behind attacks contemplated or carried out like those at Staples, in Newtown, and Parkland.

She said she plans to have the first assigned to Staples because statistics show that high schools are where the greatest threat is.

Palmer said she has worked with SROs for 20 years, and that Westport is the only district in the area that does not have one.

SROs are hand picked by the administration and the police, she said. They are officers who can build a strong relationship with students and administrators, and who become a part of the school by participating in school events and activities.

The attack threat, she said, is “typically internal. “

“(It’s) someone who’s been in your school, who feels disenfranchised, who has a mental illness and access to weapons,” she said. “He feels that suicide is his way out… I’m going to shoot as many people as I can because I’m going to die anyway.”

In the event of an attack, “we’ll lock down.” Palmer said. “The SRO will go in, and engage the shooter in a firefight with a trained officer.”

Access to guns is a serious issue, she said, adding: “We need to figure out what’s common sense gun control… I don’t know any hunter who uses an AR-15 to shoot a deer.”

And she said she “doesn’t endorse teachers being armed.”

Palmer said she is happy that the press will not identify students involved in such incidents, and so deprive the shooter of any notoriety.

Yet it was pointed out by a club member that by the next day most everyone knew the identity of the Staples student involved, either by word of mouth or from social media.

Palmer said today’s students “are smart, they are mature, they know what’s going on,” and that “We (in Westport) have the smartest student body in the entire world.”