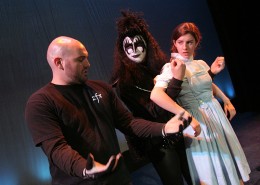 Flying Director Alex Thompson of ZFX Inc. (l) demonstrates the correct way to snatch up prey to the Leader of the Winged Monkeys, played by Andy Friedland(c).  Dorothy, played by Mia Gentile (r), is his victim in the Staples Players production of “The Wiz,” which opens Friday. (CLICK TO ENLARGE) Contributed photo
Members of Westport’s Staples High School’s Staples Players theater group learned to literally fly across the stage in preparation for the many flying sequences planned for their production of “The Wiz” which opens Friday night.

The flying, performed by a number of the show’s characters, is a theatrical and technical feat that has not been performed by Staples Players since the 1967 production of “Peter Pan.”

Staples Players Director David Roth is excited about the drama added by the special effects, too.

“Dorothy is literally swept away by the tornado,” he said. “The Wicked Witch throws her servants through the air around her castle.  We have a flying monkey that really flies.  And we have a lot more surprises for the audience than that.”

ZFX Inc., a professional special effects company that specializes in theatrical flying, is working on the production to rig and oversee all the technical aspects of the flying.

ZFX Flying Director Alex Thompson described the flying in this production as much more sophisticated and technically advanced than what was possible 40 years ago.

“The kids . . . the entire audience will really be blown away by all the magic of this production,” he said.

Roth said “The Wiz” was written in 1975 and the Players have totally seized on this and created their own disco fantasy.

“Glinda, the Good Witch, looks like Cher, the Emerald City reverberates like Studio 54, The Village People are well represented by a group called the Yellow Brick Road and the Wiz himself is a dead ringer for Elton John—Elton John if he were 11 feet tall,” he said.

Performances are this Friday and Saturday, and next weekend as well, at 8 p.m. and a Sunday matinee this weekend at 2 p.m. in the Staples High School Auditorium.

One thought on “Players Prepare to Fly in “The Wiz””