Westport police today identified the worker killed Sunday while working on a Compo Beach construction project as Juan B. Rodriguez, 29, of Stamford. 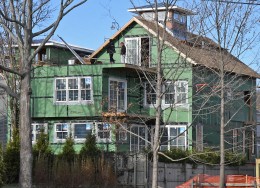 The men were found at the rear of the home under construction at 9 Norwalk Ave. (CLICK TO ENLARGE) WestportNow.com photo

A second worker, whose name was not released, was taken to Norwalk Hospital with life- threatening injuries. Lt. David Farrell said there was “no update on his condition at this time.”

The cause of the accident at 9 Norwalk Ave. remains under investigation, he said. Taking part were the Westport Police Department Detective Bureau and the Occupational Safety and Health Administration.

“The deceased was transported to the Chief Medical Examiner Office where an autopsy will be performed,” Farrell said. “As of today, no charges have been filed in the accident.”

The accident, in clear, 43-degree weather, occurred at about 12:45 p.m. on the street steps from Compo Beach. Two nearby homes are also under construction on the street.

A woman who was in tears said she heard calls for help and ran behind the house to find the two men.

Although there was scaffolding erected on one side of the three-story house, there was none at the rear, where the men were apparently working on the roof of a second story portion of the structure.