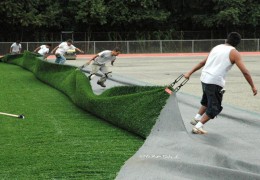 “It’s important we do the replacement right,” Marpe said, adding that the fields — P.J. Romano, Wakeman B, Jenny Parker and the Staples field — are “used by thousands of residents of all ages.

Saying that the funds via bond and note authorization to the Municipal Improvement Fund Account was significant, Marpe said he was “actively seeking private donations to reduce the bond appropriation.”

The Board of Selectmen is scheduled to vote on the matter Wednesday, with an expected approval of the contract between the town and Mamaroneck, N.Y.-based DeRosa Sports Construction, Inc., the lowest bidder on the project.

The selectmen are also expected to approve the contract between the town and Milone & MacBroom, Inc., the Cheshire engineering firm overseeing the replacement of the synthetic turf fields and the Staples running track.