Westport’s Representative Town Meeting (RTM) tonight unanimously approved an appropriation that First Selectman Jim Marpe said would have a positive impact on budgets and on the town’s carbon footprint—$8,245,000 to implement an energy savings initiative. 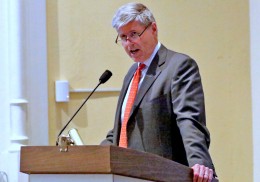 Iain Bruce, head of the town’s Energy Performance Committee: “This is a sweet spot.”  (CLICK TO ENLARGE) Dave Matlow for WestportNow.com

Marpe has touted the contract as a perfect example of the school system and town government working together to reduce energy costs.

The investment grade audit report was prepared by NORESCO, a firm that the year-old Energy Performance Committee (EPC) hired after a competitive bid.

According to Iain Bruce, who heads the EPC, the project would result in $8.7 million in gas and electric energy savings over 10 years, which would jump to $14.2 million over 15 years.

Bruce said that annual projected energy savings would net a 28 percent savings in electric use, 17 percent in gas and .4 percent, an equivalent of 266 gallons, in oil.

“I came to this with a fair degree of skepticism, but the analysis really convinced me,” Bruce said. “…This is in a sweet spot.

“This is probably the largest single thing the town can do to move us to our energy reduction goals for 2018 and 2050,” Bruce added at the end of his presentation. ” …We begin to capture the savings pretty quickly.”

Prior to the vote RTM member Wendy Batteau called the project another example of Westport being “a leader in differnt kinds of endeavors” that other towns can follow.

In other matters, the RTM unanimously approved a request from Elio Longo, director of school business operations, for $150,000 to replace the 30-year-old asphalt shingle roof at Coleytown Elementary School (CES).

The RTM also unanimously approved Longo’s request for a $1,323,000 appropriation with bond and note authorization to the Educational Facilities Improvement Fund Account for upgrades to the boys gym locker room, general pool area and bleachers, and the boys and girls pool locker room area at Staples High School.

The project would include single-stall showers to be sensitive to gender issues, said Neil Phillips of the RTM Education Committee, which unanimously recommended approving the request,

Prior to the vote, Longo said the request was time sensitive since the lead time for construction is eight to 10 weeks to commence over the summer.

In addition, the RTM unanimously approved a capital request from Longo for $127,000 with bond and note authorization to fund the replacement of nearly 60-year-old classroom casework, cabinetry and sinks at 28 locations at CES.