By a vote of 31 to 1 tonight, Westport’s Representative Town Meeting (RTM) closed the book on a new police pension contract that has been in negotiations since 2016. 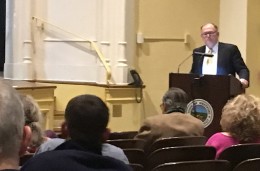 The pension agreement had been the subject of heated debates, town approval, rank and file rejections and ultimately state-mandated binding arbitration that ended Dec. 7 with the arbitrators mostly siding with the town (14 decisions in favor of the town, five for the union) — and the union not happy.

The RTM vote was to not reject the arbitrators’ decision. Catherine Calise was the lone dissenter, arguing that the RTM should reject it, so the town could make good on its promises to officers when they signed on to work in Westport.

Police Local 2080, hoping to get the defined contributions down to 8 percent after the town had agreed to go to 9 from 10 percent, got an unwelcome surprise. Arbitrators bumped it back to the original 10 percent.

According to Floyd Dugas, town labor counsel, the pension contract that runs retroactively from July 1, 2016 through June 30, 2024, mirrors the same eight-year one that the town and Local 1081 International Association of Firefighters, AFL-CIO agreed to and was approved by the RTM in March.

“It’s exactly the same deal the Fire Department got, except they’re (police) paying 10 percent,” Dugas said. “These guys tried to roll the dice and get 8 percent.”

Dugas said the pension agreement would save the town “$41 million over the next 20 years” by correcting what he called overly generous pension benefits that made Westport “an outlier” compared to other towns.

Dugas said the police cost of living adjustment (COLA) of 4 percent “were way out of whack” with other municipalities that had no such adjustments or topped out at 2 percent.

He also said there had been no benefit reductions when surviving spouses were included, which is standard in most pensions. Now that has been corrected, he said. Also, police retirement age has risen from 49 to 52.

The pension contract has been a virtual, heated tennis match for more than a year.

On Oct. 3, 2017 the RTM unanimously approved both the police and fire contracts. Despite that approval, the police union later that month voted of 44 to 5 to reject a town-approved pension agreement that reduced benefits for current officers with less than 20 years service.

At the time, Cpl. Howard Simpson, union head, said the town was taking too many benefits away, “and it was more of a concession than a negotiation.”

The biggest rub for police was that officers with fewer than 20 years on the job would have the benefits they had signed on to changed.

Tonight, Calise remained the lone voice asking the legislative body to reject the arbitration ruling, which would have set off a second round of arbitration hearings.

“I think it’s shameful that we can spend $800,000 on a bathroom at Compo Beach and not support our police,” she said, adding that they are ones who put their lives on the line for residents.

“The police were the outliers,” she said, adding that in 2012 she had asked Dugas to do a review of municipal contracts.

Dugas said he was unable to review the police contract because it had a lockout provision until it expired in 2016.

RTM member Kristan Hamlin agreed with Schine that the police have had very generous retirement packages. She said the town needed to strike a balance for the taxpayers, as well as other employees.