Construction at Coleytown Middle School (CMS) remains on schedule for an October reopening, but the big question is whether students will even be going back at all this fall. 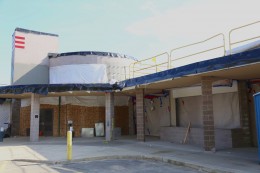 “It is literally changing sometimes daily with things that you’re hearing from the C.D.C., from state officials, from other sources,” said John Bayers, director of human resources and general administration, who is co-chairing the School Reopening Steering Committee (SRSC) with Anthony Buono, assistant superintendent for teaching and learning.

The two shared an update with the Board of Education (BOE) tonight on formation of the committee that aims to get plans in place for any of a number of potential scenarios for next school year.

“You hear different ideas, (but) we’re not committed to anything,” Bayers said, noting that fall could bring a full return or a partial return to school buildings for smaller groups of students on a rotating basis.

“The idea that we’re not really able to open on time and must start the year in a distance-learning model is something we have to look at as well,” he said, noting that schools could also reopen and then shut down again if the community or the state were to see a resurgence in the numbers.

Buono said different groups, including the C.D.C. and the teachers union, are recommending different standards for class sizes, from 10 to 15 students.

“There’s a variety of recommendations out there,” he said. “It hasn’t been clearly defined.”

Likewise, directions from the state of how municipalities need to handle summer school have not yet arrived, though Buono said they were due Monday.

“We’re waiting for those recommendations,” he said. “They’re continually changing (so) we’re just going to have to monitor that.”

“By the end of this week our work groups will be fully constituted and they will have their initial meetings,” he said, including subcommittees working on facilities, safety and extracurricular activities.

“We will provide you an ongoing update on what work the committee is doing,” Buono said, with a more formal update to be presented to the BOE at its June 8 meeting.

“I think we’re going to have some extra meetings over the early part of the summer,” BOE Chair Candice Savin said, “to get our arms around this.”

Meanwhile Don O’Day, chair of the CMS Building Committee, gave a positive report on progress at the construction site.

“We’re not going to be open by September 1, but our October opening is still on schedule and everything is fine there,” he said, noting the supply chain is holding up and that there are much fewer absences among the work force on the site.

“We should, I guess, in the next several weeks be at a pace where we would be if COVID had never happened,” he said, though the project ultimately remains somewhere around six weeks behind schedule.

“We’re still very much on budget and that’s a good thing,” he said.

O’Day said his committee met last week with Kris Szabo, CMS principal, with whom they discussed the construction of the new entranceway.

“I think everyone is going to be quite pleased with how that entranceway looks,” he said.

O’Day continued to commend the work of Newfield Construction, which he said is aware of the town’s desire to see the school opened as soon as possible.

“Every day that passes without a problem, we’re closer to that October opening,” he said.