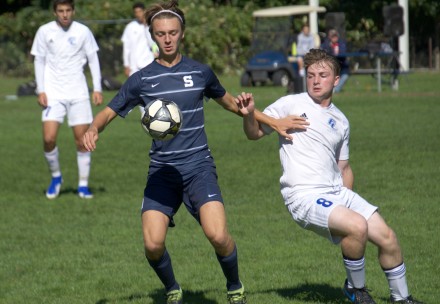 The Staples boys soccer team’s late onslaught of shots was denied by Fairfield Ludlowe today. The Wreckers and Falcons drew 0-0 in a tight match played before a large crowd at Loeffler Field. Staples enters the second half of the regular season with a 5-2-2 mark, contesting for high seeds in the FCIAC and state tournaments. Pictured: Emerson Anvari has sparked Staples lately, with his attacking play. (CLICK TO ENLARGE) Christina Bassler for WestportNow.com