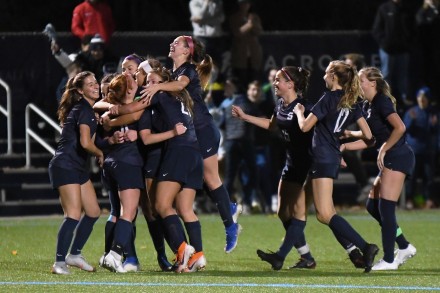 The Staples Girls Soccer team will face St. Joseph High School, Trumbull in the FCIAC Tournament final on Thursday after romping over New Canaan with a 6-0 victory at Wilton High today. The Lady Wreckers offense was going nowhere until 20 minutes into the game, when that all changed with a scoring explosion started by senior Marlo Von Der Ahe. Three minutes later it was another senior, Mia Gonzalez finding the back of the net. Less than two minutes later it was junior Autumn Smith’s turn to score goal number three, with another junior, Lys Goldman bringing Staple’s first half total to four goals. It would again be Smith for the first score of the second period. Next, it was senior Katie Ialeggio who capped the game with the sixth and final goal with 14 minutes left on the clock Pictured: team celebrates a score. (CLICK TO ENLARGE) J.C. Martin for WestportNow.com