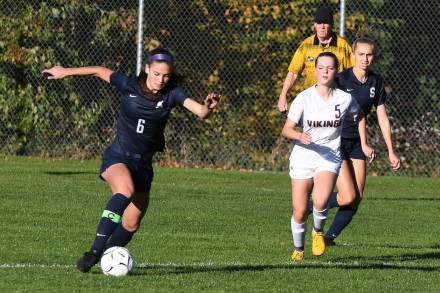 The Staples Girls soccer team was back in form today, dominating Westhill of Stamford from start to finish, defeating the Vikings 7-0 after ties in their two previous games. The Lady Wreckers scored early and often, with one of four first period goals by senior Mia Gonzalez in under four minutes. Another senior, Marlo Von der Ahe then scored two in a row, followed by sophomore Haley Roraback with yet another goal. The rout continued in the second period with scores by junior Charlotte Zhang, junior Hayley Buckman and a final goal by another senior, Marisa Shorrock. The girls face a tough New Canaan team at home on Friday. Pictured: Staples Mia Gonzalez who scored the first goal today in the Lady Wreckers 7-0 shut-out of Westhill of Stamford drives the ball upfield past a Viking defender. (CLICK TO ENLARGE) J.C. Martin for WestportNow.com