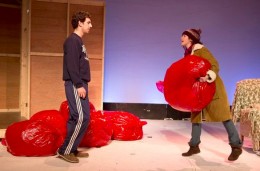 Performances will take place in the Black Box Theater at Staples High School on Thursday, Friday, and Saturday at 7:30 p.m. and on Saturday at 4 p.m.

The Players announced Tuesday that the group will offer a special pricing for the 4 p.m. Saturday matinee performance. Tickets will be $5 for both students and senior citizens -– discounted from the normal $10 for students and $15 for an adult.

David Roth and Kerry Long are directing the play of vignettes which will cap off the major productions directed by the team for the current school year.

As noted on the play website, “Almost Maine” inventively explores the mysteries of the human heart. On a cold, clear, moonless night in the middle of winter, all is not quite what it seems in the remote, mythical town of Almost, Maine.

“As the northern lights hover in the star-filled sky above, Almost’s residents find themselves falling in and out of love in unexpected and often hilarious ways. Knees are bruised. Hearts are broken. But the bruises heal, and the hearts mend—almost—in this delightful midwinter night’s dream.”

“Each vignette deals with some stage of a romantic relationship,” said Roth. “A couple meets and falls in love, a man runs into his ex on the night of her bachelorette party, a couple of friends find unexpected love, a woman gets her first kiss well into her adult life, etc.

“But, what sets this show apart is that there is a magical element to each of these common scenarios—in each, something other worldly happens to aid in the making – or breaking—of the love. It takes every day situations and presents them with a twist. It’s cute and funny and will surely warm your heart.”

“Almost, Maine” has had an unlikely road to success. It closed a month after it opened Off Broadway. Entertainment Weekly selected it as one of the worst shows of 2006. Yet it gained admirers and has been produced around the world, including in Australia, Dubai and South Korea. More than 600 companies, amateur and professional, have put it on in the United States and Canada.

it was the most produced high school play in North America in 2010,  unseating Shakespeare’s “Midsummer Night’s Dream” from the No. 1 high school slot, according to Dramatics magazine’s Top 10 list.