The Staples Players production of “Twelve Angry Men,” opening on Thursday, explores what happens when 12 men and women from various backgrounds are summoned to court on a hot summer day to decide one man’s fate. 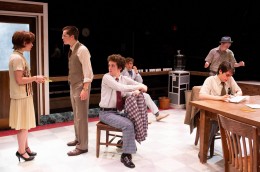 During the heated deliberations of a homicide trial, the hidden preconceptions and assumptions of the jurors are revealed in the play originally written by Reginald Rose as a teleplay for CBS in 1954.

“With racial profiling and challenges to justice ever present in the news today, this felt like the right time to bring back this show,” says Roth, who last directed the play in 2009.

The 1957 feature film version, starring Henry Fonda (as Juror No. 8), was nominated for three Academy Awards. The play, staged in London’s West End in 1964, premiered on Broadway in 2004 and ran for 328 performances.

Online sales at http://www.StaplesPlayers.com; tickets may also be purchased in person in the Staples High School Black Box Theatre lobby 30 minutes prior to performances, as available.