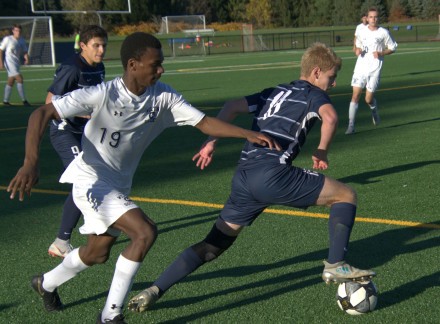 The Staples High School boys soccer team today played one of its best matches of the year against one of the top teams in the FCIAC. The 1-1 tie against Wilton at Wakeman Field featured end-to-end action, with the Wreckers surging in the final 20 minutes. Benny Feuer headed in Patricio Perez Elorza’s corner kick for the lead. The Warriors drew even seven minutes later, on a rebound. Staples goalkeeper Reed Caney made several outstanding saves, while Evan Birns, Alan Fiore, Murilo Moreno and Sam Liles anchored the midfield. Staples completes the regular season 8-4-4. The FCIAC playoffs begin Thursday, with the Wreckers traveling to Danbury. Pictured: Carter Bassler had an excellent game for Staples, as an outside back. (CLICK TO ENLARGE) Christina Bassler for WestportNow.com