In the early 1900s, people who wanted to buy a car went straight to the manufacturer, whether it was a trip to Detroit to plunk down cash for a Ford or a short trip to Bridgeport for a steam-powered Locomobile. 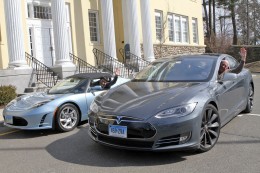 “In the old days, you bought directly from the manufacturer,” said Leo Cirino, president of the Westport Electric Car Club (WECC). “You went to Detroit, you picked up the car and you went home. You know, it’s called free enterprise.”

No so any more, and therein lies the rub for Connecticut’s electric car buffs, in particular, those smitten by the Tesla. State law requires that in order to sell new cars, one has to be a manufacturer’s authorized dealer.

“Tesla is a little different in that they don’t want dealers, they don’t have dealers,” said Cirino, though the company has a few service centers in the state.

Instead, the company uses a manufacturer’s direct sales business model, a model not allowed in Connecticut.

That hurdle will be the focus of a talk by Will Nicholas, Tesla’s government relations manager, as he addresses the WECC meeting on Thursday, April 14, at 5:30 p.m. at the Dragone Classic Cars showroom at 176 Post Road West. The meeting is free and open to the public.

According to Cirino, Nicholas will discuss Tesla’s efforts, plus recent legislative efforts “to craft a bill that would change this.”

“I look forward to speaking to this group of knowledgeable and politically involved EV (electric vehicle) enthusiasts, many of whom are already Tesla owners,” said Nicholas.

“There is a lot happening at Tesla in terms of vehicle development, the Gigafactory battery initiative and our efforts to expand distribution.”

Nicholas is also scheduled to bring with him a Tesla Model X, the vehicle which in three months from being introduced in January was the second highest volume EV seller after Tesla’s Model S.

Nicholas will also talk about the Model 3, the company’s newly unveiled $35,000 EV for which there are already more than 250,000 pre-orders. It is expected to roll off the production line in late 2017.

“It’s a little smaller than the regular Tesla, but it will go 250 miles instead of 200,” said Cirino.

He said the club will also discuss plans for its fourth annual EV Road Rally set May 1, plus participation in Westport’s Green Day EV event on May 14.

“We are delighted to have Tesla come to speak to our club and our guests about the latest from Tesla,” said Cirino.

“We just want everybody to buy electric cars,” he added. “They’re clean, they’re good and don’t burn gas or oil, and there are no emissions, so you don’t get choked.”