Westporter Sarah Cooperman. 18, recalls sitting alone on the patio of the Tundra Buggy Lodge in Churchill, a town of 900 in Manitoba, Canada, staring at a beautiful polar bear yawning and turning over in the brush. 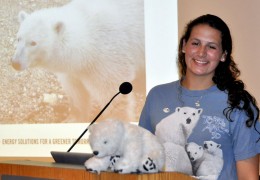 She says she was mesmerized, enchanted, especially when the bear turned over and the two locked eyes. She felt as though her heart had stopped beating.

“It was during this moment—this gaze that seemed to last forever—that I realized the world is much bigger than anything I could have comprehended from the world back home in Connecticut,” said Cooperman, a 2013 Staples High School graduate and an Arctic ambassador.

It was also at this moment that Cooperman decided she wanted to help the polar bear.

Monday night Cooperman, who will attend Williams College in the fall to study either environmental science or biology, shared her polar adventures with 31 eager listeners assembled in the Westport Public Library’s McManus Room.

“When coal miners used to go out and try and find somewhere safe to mine, they would send the singing canary into a cavern or a place they were going to go into, and if they heard it stop singing, they know that the place is unsafe to enter, maybe there’s a chemical inside, something not good is going on in that cavern, so they’re going to get out of there as fast as they could.

Cooperman’s environmental interests took flight in 2011 when she wrote an essay and went through an interview process with the Gault Energy-Polar Bears International (PBI) Alliance, earning her a place in PBI’s Leadership Camp in Churchill, which calls itself the “Polar Bear Capital of the World.” 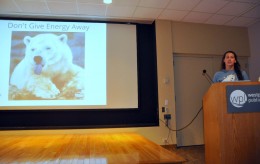 A self-described “environmental dork,” Cooperman has held such strong feelings for preserving the environment that on Halloween in 2011, she dressed up as a recycling man. She expressed gratitude for having been chosen for the the camp.

“I’ve always loved the environment and animals, probably an unhealthy amount, really, and I was so lucky to be chosen as winner of the Arctic Ambassador contest,” Cooperman said. “It really changed my life.”

In Churchill, Cooperman and the other Arctic ambassadors slept and worked in the Tundra Buggy Lodge that consisted of two sleeping cars, a dining car,and a lounge car where the students would have meetings.

The Arctic ambassadors also took a pledge to each try their best to reduce their carbon footprint while staying at the Tundra Buggy Lodge, she said. Included in this pledge was the promise not to shower for one week.

Cooperman said that some days she and others would venture out to look for polar bears.

“Patience was key, but it often paid off,” she said.

During the camp, the students were also able to talk to a Churchill polar bear patrol officer, learning about bear traps and about” bear jail,” where mean bears are held for 30 days so that they learn their lesson.

While in Churchill, Cooperman says her knowledge of the environment—and its need for human help—grew. 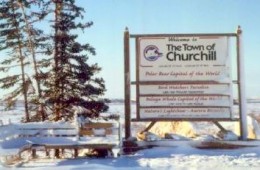 Churchill calls itself the “Polar Bear Capital of the World.” Wikipedia photo

During her presentation, Cooperman introduced ways to reduce one’s carbon footprint, such as switching to alternative energy sources like solar panels, changing modes of transportation, such as biking or driving an electric vehicle, and staying naturally warm or cool rather than excessively using the air conditioning or heat—even reducing meat consumption.

“I can give you some great recommendations for soy nuggets and they really do taste as good as chicken nuggets,” Cooperman said. “I promise you.”

Cooperman stressed that the magical moment she shared locking eyes with the polar bear galvanized her environmental awareness.

“I think it was also during this moment when I realized that reducing your carbon footprint and doing your part is one of the most selfless things a person can do,” said Cooperman.

“Dedicating yourself to a healthy planet is not only ensuring your own future, but the futures of your children, the futures of people in countries less fortunate than the one we live in, and the futures of all living things in Earth’s ecosystems,” she added.