We, the staff at WestportNow.com, received the following letter from State Rep. Jonathan Steinberg. In deep appreciation, we are publishing it to share it with our WestportNow.com readers.

I’ve been thinking about Gordon over the past several days. He was a great Westporter in many ways, but also played a role on the world stage as a reporter and bureau chief. To me, he was the consummate observer—an ideal profile for a reporter in the thick of world events. But that laidback, seemingly impassive style presented an interesting counterpoint to most of us more impassioned politicians. 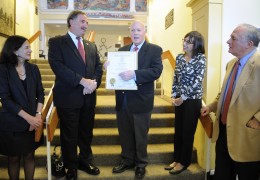 Given his several significant career chapters, one could describe Gordon as a Man of Many Faces. The irony is that, whatever the role in which he was serving, it was often hard to read that face! I’m sure it frustrated many supplicants, whether during his tenure as RTM Moderator or as First Selectman, that it was near impossible to get a rise out of him. His steadiness, particularly during the Great Recession, kept our town on an even keel and focused debate on the merits, not the personalities.

I first got to know Gordon when I was first elected to the RTM in 2003. Frankly, I was in awe of the long-time Moderator. New to elective politics at the time, I was uneasy about engaging him to discuss committee assignments. I soon realized that the cool exterior and soft voice reflected a gentleness and empathy often in short supply among elected leaders. Although we didn’t always agree on everything, it was easy to take him at his word and trust that he’d do as he said he would.

That’s a great quality that served his community well, and continued during his eight years as our First Selectman. Some would focus on the contentiousness of those times, driven by budget deficits and arguments about fiscal austerity measures. But you’d have to look really hard to notice any anger on Gordon’s side. The old line about “keeping your head while others are losing theirs” allowed him to tamp down the rhetoric during trying times.

Through all these travails, Gordon remained Gordon. How many municipal executives would you find patrolling the sidelines as Staples football games as photographer (and erstwhile EMS professional)? Gordon’s natural inclination to capture and chronicle the world around him never abated. I’m sure his everlasting curiosity about the human condition informed his brilliant idea—a concept ahead of its time—to create Westport Now, the online medium which kept Westporter’s up to date every day. 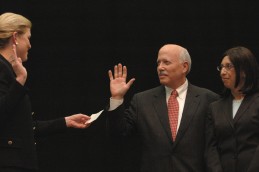 In recent years, challenged by the illness to which he ultimately succumbed, Gordon chose to remain below the radar—hardly a surprise given his character and experiences, but virtually unheard of among most elected officials who crave the spotlight. It was easy for Gordon to go back to being Gordon, because he had never really changed in the first place!

When Gordon was elected as First Selectman and was leaving the RTM, I seized upon the bizarre idea of feting him with an ode. Sung to the Gilbert & Sullivan tune, “When I was a lad”
(often known as “Ruler of the Queen’s Navee”), Ode to Gordon attempted to humorously summarize his remarkable life in tortured rhyme. To me, it was no surprise that it required nine stanzas!
Gordon has now run out of new stanzas.  But I’ll never forget the ones he had. Rest in Peace, Gordon!