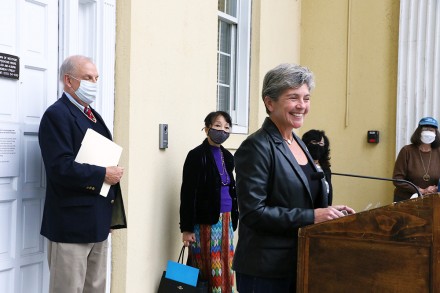 Selectman Jennifer Tooker welcomes attendees at a a ceremony at Town Hall celebrating the 75th anniversary of the founding of the United Nations on October 24, 1945. Also present are Bill Hass, Vice-President of the UN International Hospitality Committee, and Aye Aye Thant, special guest who is a Westport resident and the daughter of former UN Secretary-General U Thant. (CLICK TO ENLARGE) Dave Matlow for WestportNow.com