With a chance to see a new Staples High School (SHS) stadium field and surrounding track up and running by the end of September, consultants and school sports officials hope the town will move quickly off the blocks.

A combined Town Hall auditorium meeting tonight of the Parks and Recreation (P&R) Commission and the Board of Education (BOE) heard different turf and design options from representatives of Milone & MacBroon, a Cheshire-based consulting group, as well as a potential timeline to minimize impact to sports programs.

Actual cost estimates for three different turf options, based on outside bids, are due Friday and will be presented at a BOE meeting tentatively set in mid-March, with the P&R Commission in attendance.

Pending town approvals for funding, construction on the SHS stadium and Wakeman B Fields would begin on May 31, with work on the Ginny Parker Field in the eastern corner of SHS and the P.J. Romano Field at Saugatuck Elementary School done the summer of 2020.

“If we don’t meet the schedule, I can tell you there will be some pretty angry athletic participants who will not be able to play home games,” said Charles Haberstroh, P&R Commission chairman.

“Mr. Haberstroh’s right,” said Marty Lisevick, SHS athletic director. “We’d have some very upset people if we don’t do it in a timely fashion.”

Worries over potential injury have prompted concern—in particular a hardening that has taken place—with each field around 12 years old and considered beyond its lifespan. The SHS track was built 20 years ago and, likewise, is due for extensive repair.

Under a long-standing arrangement, the town is responsible for maintaining the athletic fields at the town-owned school buildings.

Last year, in preparation of the imminent replacement of the turf fields, the Representative Town Meeting (RTM) unanimously passed a ban on the use of synthetic rubber—or “crumb rubber”—on any fields in town, as some studies have shown potential health hazards through the off-gassing of chemicals, including cancer. 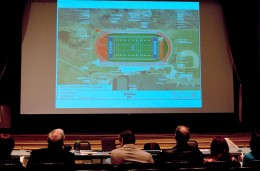 While that material still remains on the current fields, Jennifer Fava, Parks and Recreation Department director, said it “would not be allowed to be used in the future” and that the current options do not include it.

Consultants have asked stakeholders to look at three different options, including a natural infill made largely of cork and coconut, a thermo-plastic infill, and one of plastic-coated sand. Each option offers different advantages, but also different costs and requirements for maintenance.

Haberstroh said that when they present their numbers at the next meeting he wanted to see overall cost rundowns that take maintenance into account.

“That has to be fully disclosed,” he said.

“Our plan is to look at these costs over a 10-year period,” Fava said, noting that was the typical lifespan for the fields.

“Obviously we want to hear from the public,” she said, adding there will be more time for it to share comments.

She said a committee, meanwhile, including representatives from the school administration, Police Athletic League, Department of Public Works, and P&R have been meeting to help craft plans and details.

“I’m talking to people with all three different types of fields we’re looking at,” Fava said, noting that none are apparently any safer than another.

Lisevick said that ultimately it should be the athletes who decide which one they favor, and he said he will be taking some students to try out the different fields in other towns.

“A lot of it is a matter of taste and what you’re used to,” said Dan Kroeber, lead project engineer. “That’s why we recommend your athletes go out,” he said, and try them.

BOE Chairman Mark Mathias raised the obvious question of why the town shouldn’t return to grass fields, such as it uses for its SHS soccer.

Given the extensive use and the impact of weather on grass fields, Fava said, there was not enough waiting time to allow them to adequately heal or be repaired on an ongoing basis.

If the town had more fields, she said, it could allow some to rest for a season while others were used.

“That was one of the real reasons this was done,” she said.