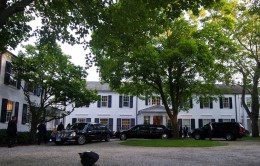 According to Westport Town Clerk Patricia Strauss, 26 Beachside Ave. sold for $10 million and adjacent 28 for $6 million, both to Westporter Andrew Bentley.

Strauss said the properties were transferred on Jan. 29 and the sales filed in her office Feb. 2.

According to Vision Government Solutions, the property at 26 Beachside Ave. includes a custom Colonial built in 1909 and set on 2.38 waterfront acres. It was recently assessed at $5.95 million and appraised at $8.5 million. 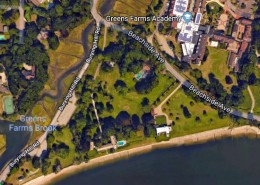 The sales represent the end of Weinstein’s real estate holdings in Westport. On Oct. 2, he sold a home at 20 Minuteman Hill Road, Strauss said. His mother Miriam had lived there until her death. Weinstein had named his movie company Miramax after her and his late father Max.

The recent sales represent a virtual Beachside Avenue Monopoly board for Bentley. He now owns six properties along the storied row of estates.
According to Strauss, he owns 120, 122, 124 and 131 Beachside Ave.

Though adjacent to each other the former Weinstein properties 26-28 have two separate deeds and will remain separate, she added.