“I literally lay awake at night thinking: What could have been done?” 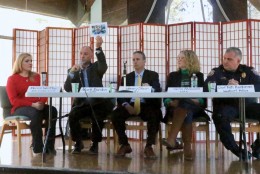 Mark Barden shows today’s forum a picture of his son Daniel, 7, who was killed at Sandy Hook. (CLICK TO ENLARGE) Dave Matlow for WestportNow.com

The anguished words came today from Mark Barden, whose 7-year-old son Daniel was among the children shot at Sandy Hook Elementary School in 2012.

His audience was more than 100 persons, mostly Westport mothers, attending the “Make It Stop Forum on Gun Violence Prevention” at the Unitarian Church.

The forum, hosted by the Facebook group WestportMoms, aimed to empower local parents, who shared comments and questions with a panel of experts.  Barden, who serves as managing director of Sandy Hook Promise, was among them.

“I would give anything to turn back the clock … and make Newtown a near miss,” he said, holding up a picture of his late son.

“There’s lots of things that you guys can do,” he said, explaining his group focuses on training school systems in prevention. 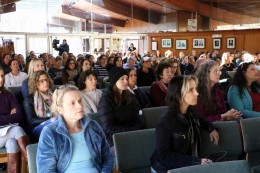 About 100 persons attended today’s forum at the Unitarian Church. (CLICK TO ENLARGE) Dave Matlow for WestportNow.com

She noted there had been 294 school shootings since 2013.

In Westport, Police Chief Foti Koskinas , another participant, said, there are 7,900 registered firearms, with around 1,000 permit holders in town.

He said signing off on gun permits was his least-favorite job, as he believes more needs to be done to thoroughly vet applicants.

“One of my biggest concerns is that we never get to speak to members of the household,” Koskinas said.

They can be the best witnesses to individual temperaments, especially during difficult times, he said. 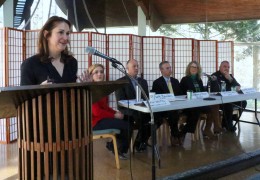 “That’s one of the places that I think we can do better,” Koskinas said, also expressing amazement that certain gun laws, including restrictions on bump stocks and “ghost guns,” were not already in place.

A ghost gun is a firearm without serial numbers that can be ordered online and turned into a do-it-yourself weapon.

“It really has to be a culture shift,” said Selectman Melissa Kane, who moderated the panel.

“It’s not just about legislation … It’s about changing the way we think about guns,” she said.

Jeremy Stein, executive director of Connecticut Against Gun Violence, said far more advocacy was needed in Hartford on March 23, than for the Washington, D.C., march scheduled the following day, for the state legislature will be entertaining public comment on two proposed gun laws.

He said opposition from the National Rifle Association would be immense and intimidating, owing to their large funding and vocal constituency, but if residents feel strongly about the issue that is where their support is needed.

“If they hear the voice of the people loud enough … this will not stand,” Barden said.

Melissa Post, co-chair of WestportMoms, waits with a microphone for audience comments/questions. (CLICK TO ENLARGE) Jarret Liotta for WestportNow.com

In response to one comment advocating that doctors issue mental health certificates for children following in-office examinations, Stein and others said it was important not to target mental health as the focus on this debate, versus guns.

“I think it’s really dangerous to say it’s mental health,” said Stein, adding that probably three-quarters of the people in Westport, as an example, had some sort of mental health-related issue. He did not cite his source.

“We need to do something similar in this country like we did with smoking,” he said, noting the need for a paradigm shift in how guns are perceived.

“Find something that resonates with your own values and get involved where you can,” Barden said.

“It’s a highly engaged community,” Melissa Post, WestportMoms co-chair, said of Westport, citing this forum as a chance to harness energy and passion.

“We have a lot to fight for,” she said, “and hopefully if anyone can make a change, a lot of loud, screaming moms can do it.”