After more than 51 years of serving up slices and a welcoming sense of community to generations of townspeople, the Westport Pizzeria will officially shut its doors Saturday, Jan. 11, owner Carmelo Mioli said today. 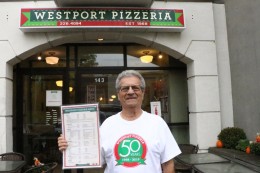 Mioli, known as Mel around town, moved to the current location in a building he owns on Feb. 24, 2014 after the Main Street lease was not renewed.

Despite a more than 44-year, iconic run on Main Street, Mioli then said retirement was not a consideration, which is the reason he started over at 143 Post Road East.

“I enjoy what I’m doing, I love the customers, and I’ve made great friends,” he said. “I don’t think about retiring.”

But after decades of devotion, giving jobs to hundreds of locals — not to mention forging friendships with memorable characters among literally millions of customers — Mioli is ready to turn out the lights. The memories are his legacy, he said.

He had hoped that one of his relatives, nieces and nephews, would pick up the torch.

After all, he said, all grew up at the Main Street shop, a narrow strip of a pizzeria, about 1,000-square feet with entrances via Main Street and Parker Harding Plaza.

Joe worked there until he retired in 2004 to run for state representative for the 136th District. In 2005, he won, holding the position until 2011.

Over the years, Mioli’s other brothers John and Santo, his sister Rita and nieces and nephews worked there — not to mention Mioli’s wife Carrie and their two sons Francesco and Alessandro.

But each forged his or her own path. Mioli’s son Francesco is a lawyer, Alessandro an accountant.

“Thank you Westport for giving me the opportunity to take care of you for 51 years,” said Mioli, adding that he will remain a presence in the community.