UPDATE If you cough or sneeze in a crowd at Compo Beach or Longshore, the Westport Police Department may be watching as part of a first in the nation new drone technology program undergoing testing to combat COVID-19. 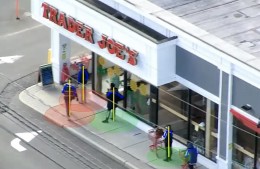 A promotional video as part of the announcement showed customers lining up at Westport’s Trader Joe’s. (CLICK TO ENLARGE) Draganfly Inc. video. via YouTube

The effort will be used to monitor and enforce social distancing on public property, an announcement said.

Citing slow re-entry directives from President Donald Trump and Gov. Ned Lamont, Koskinas said, “The only way to come out of this is through aggressive monitoring.”

Asked about concerns about Big Brother watching you, Koskinas stressed, “We are not singling out any individual, and facial recognition is not being used.” He added at the drones would not be used to monitor any private property or private clubs.

If a group at Compo or Burial Hill Beach, for example, is not wearing masks and huddled closer than the recommended six feet, the overhead drone will make a public service announcement that the group is not practicing social distancing, Koskinas said.

“Or, if the park’s closed it might say, ‘The park is closed; please leave the area,’” he said.

The drone will make the same announcement two times. If they go unheeded, and the congregants just wave it off, “we could have an officer respond to the area,” Koskinas said.

The Police Department has had a drone program since 2016. Headed by Capt. Ryan Paulsson, an FAA-licensed drone pilot who trained at Sikorsky Airport, drones, of which the department has three, have been used for Silver and Amber Alerts, monitoring car accidents, support for regional SWAT teams, and helping the Fire Department locate rooftop hot spots during all structure fires.

Paulsson said that two more officers are now being trained at Sikorsky.

In the face of the invisible coronavirus, Koskinas said, the department was fortunate to be contacted by a local resident connected with Draganfly, a California-based drone company. The result was Draganfly partnering with the Westport Police Department, providing free, futuristic software.

How futuristic? The drones will also gather, while protecting identities, the body temperatures, respiration, cough and blood pressure readings within the clusters to identify the pandemic before it happens, Koskinas said

“This is a pilot program, and we’ll be checking the reliability and credibility of the data,” Koskinas said, adding the data would most likely not be used by the police but health officials. “This is for early detection, so that resources can be used.”

He said that using the technology to combat the pandemic is in keeping with Westport being forward thinking.

First Selectman Jim Marpe lauded the program to tackle COVID-19 in Westport, which had been the state’s initial epicenter of the virus following a March birthday party.

“I am proud of how Westport’s first responders are handling COVID-19, and how the Westport Police Department in particular is committed to discovering solutions for current and future health emergencies,” Marpe said.

“We’re always looking ways to be progressive,” Koskinas said. “The easy thing for me would be to sit back and do nothing.

Draganfly CEO Cameron Chel was enthusiastic about the partnership with Westport.

“The Westport Police Department is one of the most progressive public safety agencies in the nation and real pioneers when it comes to adopting and integrating new technology to enhance the safety of their citizens and first responders,” he said in a news release.

“This coronavirus pandemic has opened up a new frontier for advanced drones. In conjunction with our partners, including the Town of Westport, together we are the first in the U.S. to implement this state-of-the-art technology to analyze data in a way that has been peer reviewed and clinically researched to save lives.”

The pilot program is made possible by the collaboration and integration of technologies developed by Draganfly, Vital Intelligence Inc., a health care data services and deep learning company, and the University of South Australia.
___