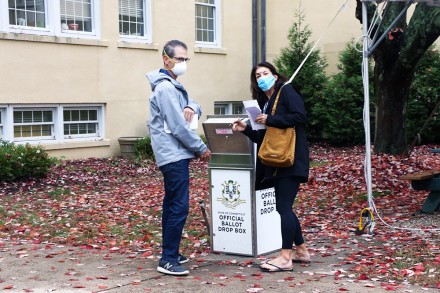 Westport residents Robert and Donna Bonafide cast their absentee ballots at Town Hall. Donna Bonafide said, “we want to avoid the long lines on election day.”  According to Ruth Cavayero, deputy Town Clerk, 9,876 absentee ballots were issued and 7,353 (over 74%) were completed and submitted as of Oct 27 (there are 23,752 registered voters in Westport). Cavayero said the party count is as follows: Democrat – 5,162 issued and 4,122 received; Republican – 1,550 issued and 1,071 received. (CLICK TO ENLARGE) Dave Matlow for WestportNow.com