Westporter Devon Delaney has participated in about 50 cooking contests over about 20 years, winning trips to Disney World, New York, Chicago, Alabama, and South Carolina, as well as more than $60,000 collectively. She has even appeared on Food Network and on the Fox Connecticut morning show. 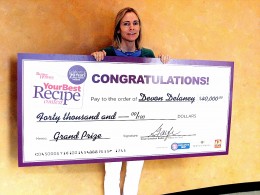 Westporter Devon Delaney shows off a check from an earlier contest. (CLICK TO ENLARGE) Contributed photo

And now she has entered another cooking contest—and welcomes the Facebook votes of fellow Westporters.

But prizes are not the only reason for Delaney’s interest in cooking contests.

“I sort of choose the contest for what the sponsor ingredient is or what the theme is,” she said. “…I just like the satisfaction of feeling like I conquered the theme or the contest. I guess I have a bit of a competitive nature.”

In July, Delaney entered and became one of three finalists in the Hellmann’s “Making Over The Best” contest in which more than 20,000 participants were required to take a Mario Batali recipe and add up to three new ingredients to create an original twist. Batali runs 16 restaurants including Tarry Lodge in Saugatuck which he opened in 2011.

The inspiration behind these ingredients came from her “killer sweet potato salad” that she makes every Thanksgiving.

“People tell me that even if they don’t like sweet potatoes, they like this,” she said. “So, I carried over the three ingredients from that.”

The hobby of entering cooking competitions began when her three children—who are now in their 20s—were young, and she was living in New Jersey during a terrible winter. The ice was so dangerous that her children weren’t even able to get to school.

Housebound and with little to do, Delaney picked up a magazine and came across an advertisement for a contest that said, “what can you do with a piece of bread?”

Now, Delaney finds out about contests through the little ads on the side of the Facebook newsfeed or through magazines.

Delaney has considered pursuing a full-time career in cooking, but has currently decided against it.

“The minute you do something like write a cookbook or have a job, you’re no longer eligible for these contests,” she explained. “Plus it’s not stressful—what I’m doing right now.”

Although Delaney enjoys competition, she vows to never let her love for it go too far.

“My rule is if I try it once and I don’t like it then I don’t do any more,” Delaney explained.

But for now, Delaney is still up against two other recipes to win Mario Batalis’ challenge. The last round consists of voting that can be found on https://www.facebook.com/hellmanns.

The winner will receive a trip for two to Hellmann’s 100th birthday celebration in New York City. Batali will be there as well.

Delaney believes it would be a great honor to be able to meet Mario Batali if she were to win the contest.

“He’s on this show during the day, and he seems like a nice guy,” she said.

“He hasn’t mentioned me on TV, but whatever,” she added with a smile.