Westporter Lawrence K. Grossman who, as president of NBC News in 1984 hired Tim Russert for the network, said today he was shocked and saddened by the newsman’s sudden death at the age of 58. 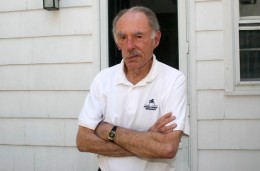 Lawrence K. Grossman, who hired Tim Russert at NBC News, is pictured at his Brookside Drive home today in between fielding telephone calls about the newsman’s sudden death. (CLICK TO ENLARGE) Dave Matlow for WestportNow.com

“I can’t believe it,” said Grossman, 76, who added that he had just e-mailed Russert Thursday night. He said he last talked to him about two weeks ago when Russert was in New York.

NBC announced this afternoon that Russert had died of an apparent attack while at work in its Washington news bureau.

Grossman, who served as NBC News president from 1984 to 1988, said he had just joined NBC when he had lunch one day with Russert, who had been working for then New York Gov. Mario M. Cuomo.

“Tim wanted to get into the news business,” Grossman said.

He said he was so impressed with Russert that he asked the Buffalo, N.Y. native on the spot whether he wanted to be his deputy.

“Everything you hear about him being a genius about politics and news is very accurate,” he said.

Grossman said he remembered Russert in their initial meeting as “very bright and curious” and “very knowledgeable about politics.”

Grossman was busy fielding telephone calls about Russert at his Brookside Drive home.

He told The New York Times today that he became aware of Russert through a mutual friend, Leonard Garment, a lawyer.

“We kept adding responsibilities to his portfolio,” he said. It was from there, about four years later, that Russert moved to the Washington bureau and then became the moderator of “Meet the Press.”

“He saved ‘Meet the Press,’ which had been in big trouble because it was not being watched, it was a half hour, it wasn’t different from the other programs,”  Grossman said.

“It had launched the whole Sunday morning information programming but had been very disappointing and nothing seemed to fix it properly until he came along.”

Prior to joining NBC, Grossman was president and chief executive officer of PBS from 1976 to 1984.