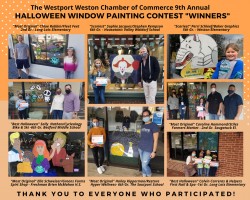 About 100 children, the highest participation to date, painted 55 commercial windows for the contest, the announcement said.

“We are so pleased to have pulled this off, in spite of the pandemic,” said Matthew Mandell, WWCC executive director. “The effort was truly worthwhile, and we thank every merchant who offered a window, to ensure every child entered had a canvas to paint.”

“This was a fierce competition,” Greenberg said. “It was clear that all the kids who participated really put their all into their artwork.

“We were so impressed by the sheer volume of participants and the high quality of their submissions,” she added.

Ribbons were placed on the winning windows, and the children received an award certificate and a gift card to Donut Crazy.

The “Best Halloween Theme” in this category was won by Sally Nathan, a sixth grader at Bedford Middle School for her painting at Cycleology.

Hailey Kiperman, who is in the sixth grade at The Southport School, won “Most Original” for the painting at Restore Hyper Wellness + Cryotherapy.

In the high school competition, Ella Schweizer, a freshman at Brien McMahon High School in Norwalk, won “Most Original” for her artwork on the windows of the Greens Farms Spirit Shop.