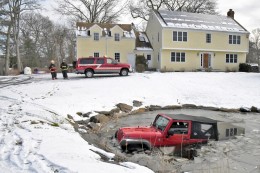 It was the most won by WestportNow in any one year since the competition was opened to online publications in 2008. The awards were announced at the group’s annual banquet in Orange.

WestportNow competed against both online and print organizations in the “hyperlocal” category, which included news organizations covering one or several communities or having a limited coverage area.

James Lomuscio won four first place awards for “Oystering on the Mill Pond” (shared with Gordon Joseloff); “On the Job with Todd Salamone,” “Tears for Future of Staples Child Development Program,” and “For Artist, Mural’s Future Uncertain with Library’s Expansion.”

Joseloff’s other first place winners included: “A Crash Turns Strangers Into Heroes” and for various headlines, including “Compo Cannon Canoodle.” 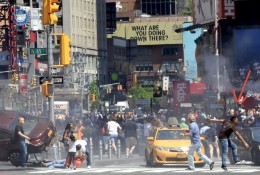 This photo of mayhem in Times Square after a man drove a car along a sidewalk won in the photo essay category. (CLICK TO ENLARGE) Helen Klisser During for WestportNow.com

Also winning second place prizes were “WN on the Scene: Suspect Flees in Times Square,” a photo essay by contributor Helen Klisser During, and the feature photo “Bubble Man” by contributor Anna-Liisa Nixon.

The competition, which attracted more than 800 entries, was judged by journalists outside of Connecticut. See complete list of winners HERE.