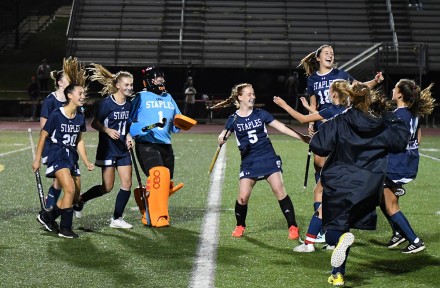 Staples field hockey’s potent offense was completely stalled for three periods against Ridgefield today, failing to score any of their 15 shots on goal. The Wreckers relied on their dominating defense which allowed the Tigers zero shots on goal. The 0-0 tie at the end of regulation forced an overtime, which was ended after barely a minute by sophomore Francine Stevens, who scored the winning goal, maintaining the Wreckers position as undefeated in this abbreviated season. Staples plays five opponents, two times each and will face Ridgefield again Wednesday, Oct. 21, at home. (CLICK TO ENLARGE) J.C. Martin for WestportNow.com