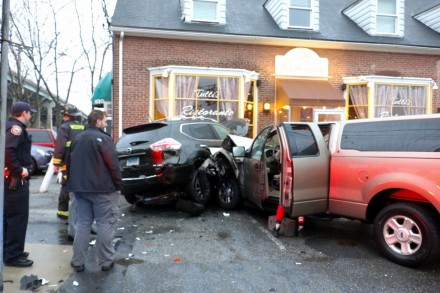 UPDATE A 61-year-old Westport man lost control of his vehicle and slammed into an unoccupied parked car in front of Tutti Ristorante, 599 Riverside Ave., tonight causing severe damage to both vehicles and to the front of the restaurant. According to witnesses, there were no passengers other than the driver. At the time of the incident, the only occupants of the restaurant, other than staff members, were Westporters Bob and Anne Levine and Anne’s son, Ty Fitzpatrick. Police later identified the driver as John Mirkov of Crescent Park Road and said he was issued summonses for traveling too fast for conditions and failuire to drive in the proper lane. (CLICK TO ENLARGE) Dave Matlow for WestportNow.com

One thought on “Car Crashes Into Tutti’s Restaurant”